A Week in April Potting up the last of the trees at the Tree Nursery. TMEugene masterminded the re-potting of around 350 trees. This has greatly improved organisation of the TN stock as well as the trees continued growth. We will be posting a list of trees available at the TN. Interesting discussion on health, nutrition and herbalism over lunch then to Wick Woodland to check on the new trees planted in recognition of former LBH tree staff sacked by the council in a political attack on TMs. Then wandered the New River and discovered a lovely Cuckooflower (right), ancient horsetails, alderflies and the first Horse Chestnut leaf miner moths (below) of the season. These beautiful, tiny (5mm) moths cause chestnut trees to go brown in late summer as millions of moth larvae devour the chlorophyll inside their leaves. Took advantage of rain to move some puddles. With these regular droughts I've taken to scooping up rain water from puddles and using it to water needy young trees. The new oak trees on Crossways are my nearest and most frequent beneficiaries. Blue compost bins are quite good but a cut down water or milk bottle will do. Ideally need a scooper and a larger receptacle for carrying the water. Scoop, pour into bucket, scoop, etc. then water tree. You soon get to know good puddles for water harvesting.

OK you look completely mad but that's because the world is consumed with the insanity of money and destruction. Doing something practical and sane often looks mad to sheeple. 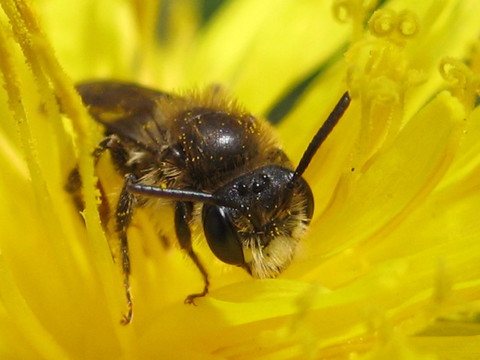 Girdled Mining Bees (gmbees) return to Abney! Actually there were always there it's just that most of the year they live in underground mines only popping out in April to breed and gather food for the next generation. The tiny bees are nationally scarce and only occur in SE England, usually on acid grassland. One of the rarest insects in Hackney they can be seen near the Church Street entrance. Found and managed to identify(!) a tiny 2mm weevil from the New River path. Also a nice hoverfly.

Pulled out some fresh knotweed in Abney. Inspired by another volunteer who was doing the same. It is very important when removing knotweed to dispose of it carefully. The best method is to leave it where you pulled it rather than risk transplanting it by moving. In Abney it's best to leave it in a pile on a gravestone where you pulled it. The trick to successful removal is persistence. Rather than try and cover a huge area just be thorough. Remove all stems in an area, getting as much root as possible. Then return to the same spot 3 or more times that year to remove again. Go back to the same place the next year. Ultimately the roots will die but it may take several years.

Got a call from Abney Trust asking what to do with corporate vols coming on Fri. Suggested bashing the Russian vine which is trying to take over the north of the site. Some idiot threw it over the fence from their garden and it now covers about 500m2. I've been pushing it back from another encroachment on the Bouverie Rd boundary. They don't call it Mile a Minute for nothing.

After hailstorm more puddle moving. Tried to Tweet the idea via the web but old mobile not Tweet compatible and my web skills not yet 21st century.

Wrote blog. Identified insects from photos and failed to work on my ground flora id.

Met Tim in Food 4 All and discussed erecting his honey bee swarm capture boxes around the Tree Nursery. Tim does sustainable bee keeping with only a top bar for the bees to build natural comb and no stealing too much honey so he doesn't have to feed them sugar over the winter.