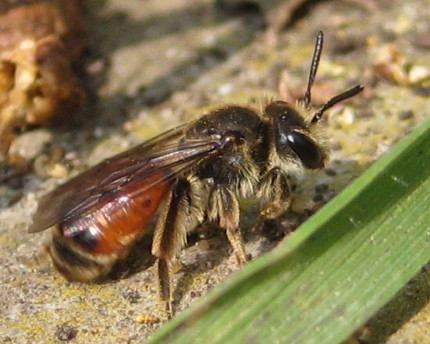 This is a girdled mining bee (Andrena labiata).  First seen at Abney last April I was delighted to re-acquaint myself with these little wonders on Wednesday. Even more delighted that the 3 on Weds had become 20 by today! They all appear to be males anxiously awaiting females. The males were loitering in the area in front of the Booth grave where the females nested last year.

These are solitary mining bees so they live alone in underground chambers but many nest next to each other. Girdled mining bees are nationally scare (designated NS A) because they only live in parts of SE England. They appear to have a preference for acid grassland. They are one of several rare species found in Abney, Hackney secret woodland nature reserve.