Stokey Sainsbury's in court - we win the first argument

Nick Perry of Stokey Local succeeded in persuading a High Court judge to grant leave for a judicial review (JR) of the Wilmer Place planning deicison. This is the second JR to be granted permission to proceed. It's complicated but there are two challenges (JRs) to two LBH planning decisions to allow Newmark Properties to build a Sainsbury's and block of flats next to Abney Park Nature Reserve.

The fight is far from over but this does mean Abney's woodland edge is safe for another summer. Which means the rare bees and other insects that inhabit this precious woodland edge can go through this year's life cycles unharmed.

If you want to make sure they are safe next year support Stokey Local.  They need more cash for the legal fight. 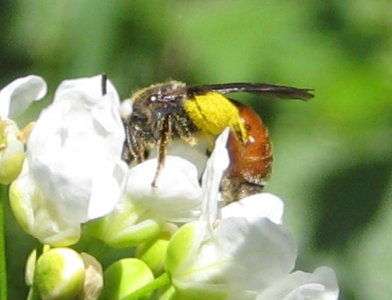 One of several rare and important insects threatened by this mad development.