the best early flowering tree for bees in London? Above: Honey bee on Prunus Okame flower on a street tre in Stoke Newington.

There is much talk about pollinators, the need for forage, and trees as a key urban resource, however the complexity of combining an understanding of botany, entomology and arboriculture often makes for bewilderment and confusion. There is an increasing volume of guidance on this issue but with such a complex area accurate new information is always helpful. I thought it useful therefore to share my experience of this particular tree.

Prunus Okame is a very early flowering cherry. It is a cultivar of hybrid origin (Prunus incisa and Prunus campanulata). There are at least two very similar trees (P. 'Kursar' and P. 'Collingwood Ingram'). P. Okame is small and upright (at least when young) and therefore suitable for many locations, such as streets and gardens where space is limited. It is also fairly quick growing. It flowers profusely in late winter or early spring. In London that can mean early February or early March depending on the length and temperature of the preceding winter. Because London very rarely experiences hard late frosts the blossom is rarely damaged. Most significantly for our purposes the blossom is very attractive to bees. 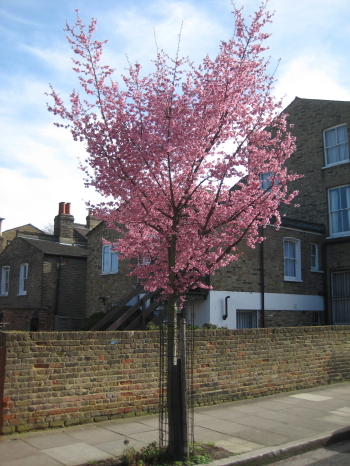 Unlike some other early flowering trees (e.g. Cornelian cherry Cornus mas) Prunus Okame buzzes with honey bees, bumblebees and solitary bees. Cornus mas has its value, both as an attractive tree and as nectar source for early hoverflies(and other Diptera), but it is rarely visited by bees. By contrast the tree pictured above is (invisibly) being worked by at least: 50 honeys bees; several hairy footed flower bees and 2 bumblebees.

P. Okame is a great early, bulk food resource for hungry over wintered honey bees or recently emerged native bees. It should be part of a mosaic of planting as it is in Hackney's excellent new street tree collection. It is an excellent example of a non-native, street safe tree that adds value by way of amenity and still benefits biodiversity. I have yet to investigate whether its leaves are palatable to any native phytophagous insects.

Good companion trees include: Almond Prunus dulcis, which flowers even earlier, and later flowering Apricot Prunus armeniaca or other hybrid cultivars like Prunus x amydalopersica. A combination of these trees will see bees and other pollinators through to April when many later cherries, plums apples and pears take over.

London experiences high temperatures associated with its south easterly location and the urban heat island effect. This means air temperatures might be as much as 5°C higher in London than in the surrounding countryside.  For this reason P. Okame may be of less significance outside London where it may flower when its is too cold for bees to fly. To be of real value however P. Okame should be planted with a southerly aspect. The tree flowers perfectly well on a north facing pavement but because temperatures tend to be low when it is in flower, bees need full sun to fly and take full advantage of the resource.