A Common Land Inspector has turned down Hackney Council's plans for a car park on East Marsh.

Proposals for a new pavilion on North Marsh were accepted: this will replace the north changing room building, on what is currently grassland, and includes a car park.

The Common Land Inspector's decision was announced on 21 August after a 2-week inquiry on 16-25 June at Stoke Newington town hall. The inquiry process gave objectors the chance to present their views in full, unlike the local authority planning process which allows just five minutes for all objections. HMUG members gave many hours and many pages of evidence to the inquiry, along with others including the New Lammas Lands Defence Committee and Save Lea Marshes. (We're grateful to SLM who took on the bureaucratic burden of collating, copying and sending in the hundreds of pages of objections and evidence.)

On 3rd June, shortly before the inquiry opened, LBH had finally brought the application before its planning sub-committee, which passed it with a number of conditions.

The pig beneath the lipstick

The inspector turned down the East Marsh car park because of its damage to the landscape, and to rights of access to the common. Since the car park was already built - an area of paving retained when the temporary Olympic coach park was dismantled - its shortcomings were on full view during the Inspector's visit to the site. The council had made an eleventh-hour attempt to hide this eyesore behind a proposed hedge, but the pig was all too visible beneath the lipstick. 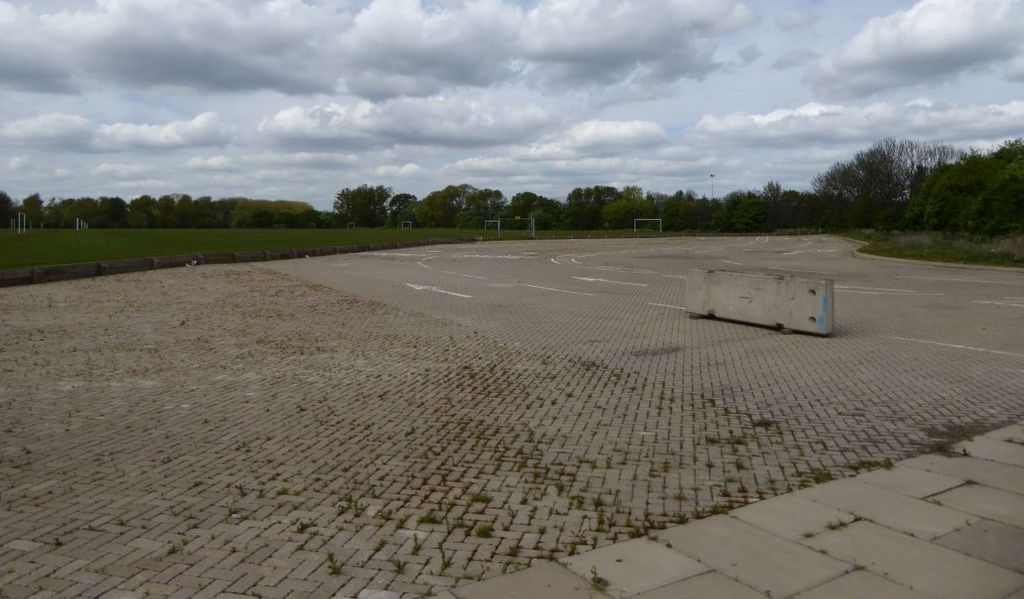 The East Marsh car park proposal was out of step with LBH's generally progressive policies on sustainable transport and car use reduction. The Planning Sub-committee chair, Vincent Stops, was clearly shocked to hear of the failure to enforce car parking limits at the Marsh Centre, and said this must be rectified. It was only TfL's intervention which forced LBH Parks to set a clear target for parking reduction across the marsh, and the Travel Plan which is supposed to achieve this contains only the most passive and cost-free of measures.

The inspector rejected one element of the pavilion plans: electric vehicle charging points in the pavilion car park. Her view (and ours) was that the council hadn't shown that they could be installed without detriment to the landscape. HMUG also objected to them because we think they would lead people to drive onto the marsh just to charge their cars – which is not what green spaces are for. Since the charging points were required by both Transport for London and their own planning sub-committee, LBH will presumably have to go back to both authorities to ask them to waive that condition.

A close eye will have to be kept on the building of the pavilion. The LBH officers' report to the Planning Sub-Committee was lukewarm about the design, and the permission insists that details of materials and landscaping must be submitted for approval. The landscaper has already been caught once trying to cut costs on the green/brown roof, and we fear this feature will be as much of a fiasco as the green roof of the Marshes Centre. The marsh is littered with poor quality, and sometimes failed, tree plantings by contractors employed by LBH since 2005. Perhaps a lesson has been learned, however, because the proposal specifies that plantings will be monitored and if necessary replaced for ten years.

The building of the pavilion will once again turn part of the marsh into a building site, and residential streets into lorry routes. It will (we hope) bring to an end a decade during which not a year will have gone by without local people's use of the marsh being affected by Olympic-inspired projects under the 'Improving the Marshes' programme, plus assorted spin-offs. Mature trees and hedges have been lost, and mitigation and repair have been inept. The ground wrecked by lorries for the 2012 pop festival is still bare in summer and a mud-puddle in winter.

All this on top of the damage inflicted by the Olympics themselves. Our view southwards, once entirely green, is now punctuated by the steel and rock of the Marshes Centre, and over-topped by various Olympic erections. Arena Field and other outlying once-green areas are now under concrete, and lost as common land. The Thames tide no longer flows up the old River Lea twice a day.

Has the future of the marshes, as a green space for all, been well served in the Olympic decade? … An open question, perhaps.