In common with other central London boroughs, air quality limits are exceeded.   As a deprived area, Hackney probably suffers a greater proportion of illness and premature deaths (GLA, 2010).

Hackney’s Progress Report 2010 reports that benzene, 1,3-butadiene, carbon  monoxide, lead, sulfur dioxide and PM10 levels continue below EU limits but NO2 breaches them.   London is the least car-dependent city in the UK but has the highest NO­2 concentrations of European capital cities.

Performance against EU and WHO limits are set out in this table: 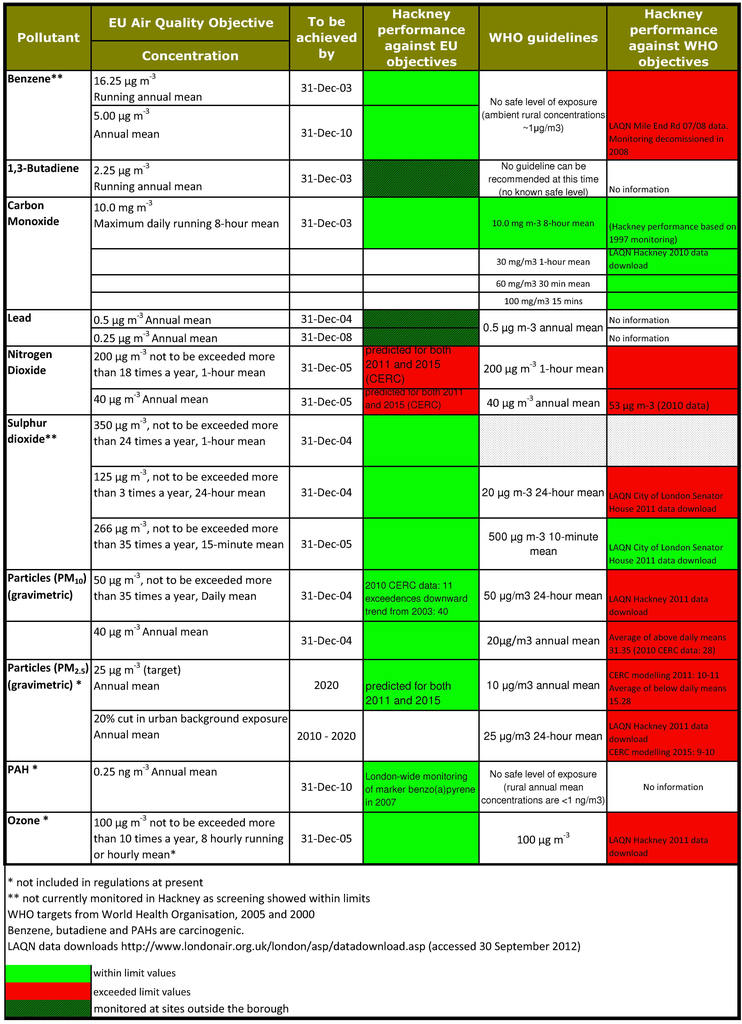 Levels are described as “low” as the index was created when adverse health effects were thought unlikely at these levels.  Updates are planned to reflect current thinking of no safe levels for some pollutants. Overall, the annual mean trend for NO2 is down but many roadside locations record increased concentrations and many breaches, some more than double the limit, see chart below (LBH, 2011).   Better Archway Forum found similar levels in recent research. The AQAP forecast compliance with NO2 limits by 2010 but they were not met.

Air quality management has been incorporated into the Local Development Framework.

The council has indicated it will assess emissions from new biomass combustion plants and retain the Air Quality Management Area for PM10 as well as NOx.   A new AQAP incorporating climate change and transport objectives will be produced and consulted on in 2013. Overall, Hackney Council has pursued air quality duties diligently but actions have been insufficient.  Urgent Government and London-wide action is necessary to protect health.   Special measures may be needed to protect populations at pollution hotspots.   London Cycling Campaign sees greater scope for action on cycling.  While stakeholders have been consulted, little has been done to raise awareness of impacts on health and actions to improve air quality.