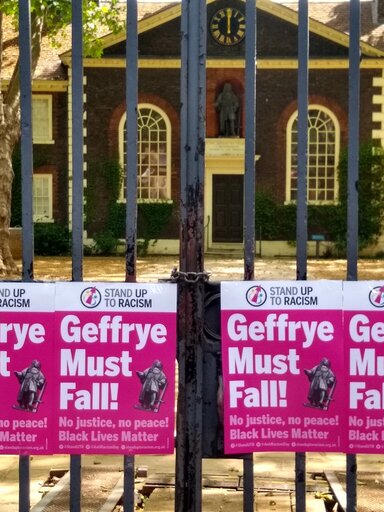 Sustainable Hackney is a local organisation committed to protecting and improving the environment. Our remit extends to social justice hence we share a concern with other residents that the newly named museum while discarding the name of Sir Robert Geffrye, has bowed to the threats of the government's culture secretary and retained the statue of the slave trader but ignored the wishes of the people in Hackney to remove it. While it rests in its niche the statue will preserve the building’s shameful association with human trafficking but relocated, as many have suggested, it could serve a positive a reminder of this country’s bloody and barbaric imperial past.  What goes around comes around; it should be noted that the proceeds of slavery largely provided the seed capital for an industrialisation fuelled by coal, and now oil and gas. Britain’s historic contribution to climate change now impacts disproportionately on those it enslaved and colonised. This fact, we suggest should be added to the plaque when you relocate the statue to a place where its proper historical importance can be appreciated. Slavery has many forms, and one is listening to power and not the people. We in Sustainable Hackney urge the chair and trustees to do the latter.