So long, and thanks for all the kale 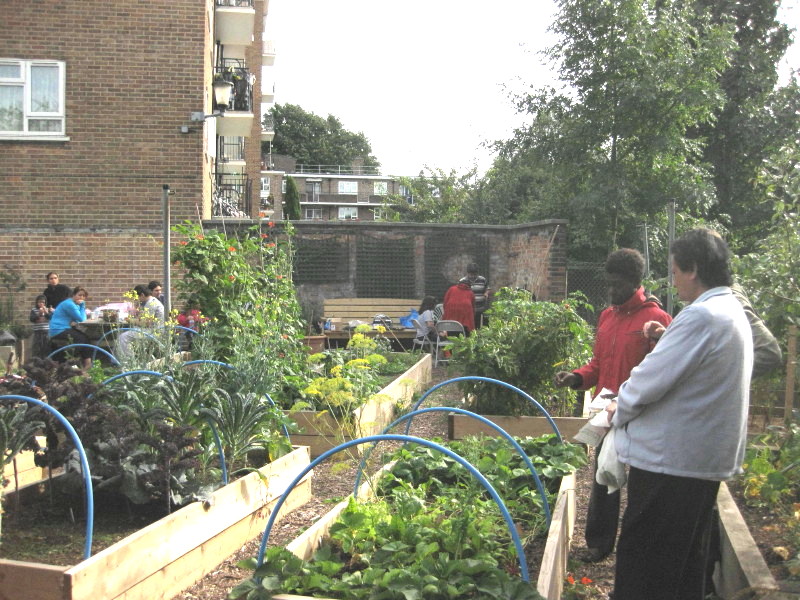 Misplaced modesty had prevented me from updating my blog about the edible garden on our housing estate (Lordship North) to say that it won 2 awards last year: Hackney in Bloom Best Community (volunteer) Garden, and 2nd prize in Capital Growth Grow for Gold People's Food Garden. But I want to offer anyone else setting up a garden on their estate the encouragement of knowing it can be done successfully.

The judges said they were impressed with what had been done with "an unpromising site". True dat. The ground is tarmac, the only bit of soil is in deep shade, and then there's the wind -- it rushes across the West Reservoir, hits our block of flats and tunnels round, straight through the garden. It might be calm everywhere else in the borough, but there is usually a gale blowing through our garden. And we're next to a clanking, sprawling scaffolding yard that is destined to become a block of flats.

But we built raised beds for the fruit and veg, and dug up the tarmac in places to make a habitat of poor soil where wildflowers flourish. Netting helped shelter the crops from the wind, although they did still suffer, but somehow (with time and attention) we managed to grow lots of veg including particularly delicious carrots and runner beans.

The other success of the garden was the number of residents, of all ages and backgrounds, who got involved in the fortnightly workshops. Everyone knows that it can be difficult to engage people, particularly on a housing estate. The only answer I think is dogged determination and personal contact. I spoke to every neighbour I met about the garden (when you are in the lift holding a bunch of carrots it is easy to strike up a conversation about food growing), I went round the estate knocking on doors before every workshop to remind people to come along, even though I had reminded them the week before and put a leaflet through their doors, and I went to the playground on sunny days to round up bored teenagers hanging out on the swings. You can't just stick up posters or put leaflets through doors and hope for the best. Forty people came to our harvest party, some attracted by the barbequed free-range lamb and chicken (from Stoke Newington Farmers Market -- we had a grant) expertly run by a Turkish family involved in the garden, others by the home-grown beetroot houmous and kale pesto (yes really).

I'm moving away from the estate, so I won't be involved in the garden much longer. Some  residents want to have their own plots, instead of the beds being communal as they were last year, and I'm glad they now have the confidence to do that. We hope to set up a gardening club to keep up the momentum, but these projects usually need a leader -- someone with the passion to put in the time to make it work -- and hopefully someone new will emerge to take up the baton. I hope they get lots of support. For me, it's so long, and thanks for all the kale.