About the Tree Nursery and Edible Forest Garden 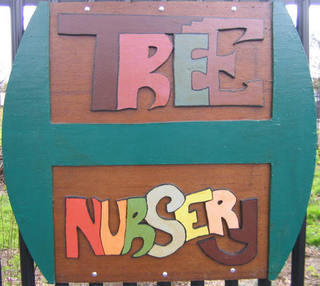 History of the site

The area now occupied by the Tree Nursery and Edible Forest Garden has had a number of uses over the years. During WW1 and 2, it provided a base for soldiers. After WW2, rubble from bombed areas of the City was deposited on Hackney Marshes, which means that a variety of building materials are soon encountered when planting trees!

Wildlife at the Tree Nursery

For a time there was a pitch and putt on what is now the Tree Nursery. In the 1990s, park staff started to use the area to store trees until they could be planted out in Hackney Parks. Since 2000, the Tree Nursery has become the base for Hackney Marsh User Group (HMUG) activities on the Marshes and in Wick Woodland. Groundwork East London erected polytunnels to provide classroom, meeting and workspace facilities, and installed lock-ups to house equipment.

Many trees have been planted by HMUG, including larch, birch, cherry and apple. Around the periphery, a hedge and shelter belt of shrubs has been planted. This comprises hawthorn, field maple, gorse, rowan and willow. HMUG has also grown cuttings of the native black poplars in Wick Woodland and raised other species, such as golden rain tree, from seed. Many of the oaks planted on the Marshes since 2000 were grown in the Tree Nursery from acorns collected in Epping Forest by local schoolchildren.

HMUG runs a weekly work session at the Tree Nursery when volunteers carry out a variety of tasks to nurture and maintain the species planted and create new habitats. The aim of the management of the Tree Nursery is to enhance the wildlife value and thus the biodiversity of Hackney Marshes. Species planted are selected to provide a year-round food resource – as well as roosting and nesting sites – for birds, small mammals and insects.

Water is very important for wildlife, and wetland habitats support different communities of species. In 2006, two ponds and a bog garden were created to further diversify the habitats.

The Tree Nursery is used as an educational base and resource for children from local schools – activities include tree planting and aftercare, sculpture using natural materials, plant identification and exploring Wick Woodland. In 2006, HMUG volunteers started to create an edible forest garden. Edible forest gardens comprise trees, shrubs, and perennial and annual species, that provide food for people and wildlife. They are designed using permaculture principles. These take into account the existing conditions, such as fertility, drainage, climate etc. The selection of species is based on their characteristics and requirements, and their ability to grow together and fulfill a number of functions, such as providing shade, support, minerals and nutrients.

Forest gardening aims to mimic the way in which species grow in forests, i.e. utilising all the vertical layers (canopy, understorey, groundcover, soil and root systems). After the initial design and planting, the work of the volunteers should be limited to mulching, some pruning, occasional weeding, minimal pest- and disease-management, and harvesting.

The ponds and bog garden are settling in, and more plants, especially edible species, such as water lily and water mint were added in 2007.