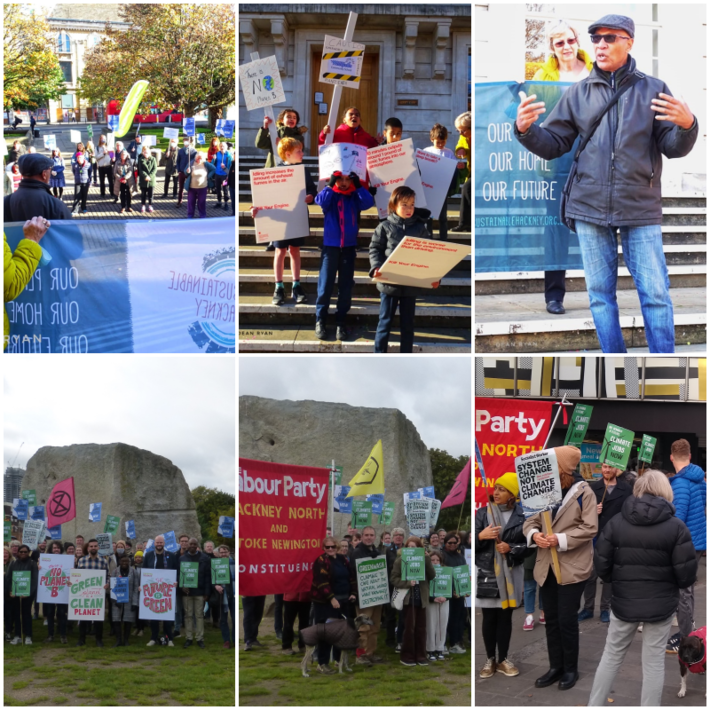 Why we had a rally during COP26

The reason this rally was called is quite simply that there is a climate crisis and we do not think the council is acting as if there is one.  We think the council is failing its staff and failing the people of Hackney by investing almost £35 million of its staff’s pension funds in fossil fuel corporations like Shell, BP, and BHP. Remember these are the corporations that engaged teams of scientists in the early 1980s to research the impact of burning fossil fuels on our climate.  They quickly discovered what we know now full well, that burning fossil fuels irreparably changes our climate.  But from the 1980s the CEOs of the major oil companies combined to bury the truth, deny the reality and cause delay. Now the danger cannot be denied and concealed but they have adopted an alternative tactic of cynical deception or green washing: Only last week SHELL pledged it was going to cut its emissions by half by 2030.  An amazing step forward perhaps, but hang on.  They meant their corporate internal emissions, the equivalent of turning down the rads and fitting some low watt LED bulbs, but decidedly not reducing the emissions from burning oil for power.  These were empty and deceptive statements of intent. SHELL has also lied about Carbon offsetting; in other words, companies admit they’re harming the planet and our climate, but claim that these harms can be mitigated, or offset, by paying to protect a small tract of  forest or other land.  In Indonesia SHELL claims it is protecting an area of peatland rainforest from timber and palm oil plantations. But an Unearthed investigation revealed that the area is already protected by the government, and has been for some time. A SHELL project in Peru was found to have similar issues.

So, why is the council using its employees’ pension funds to extend the inexcusable activities of these companies? We know that fossil fuel reserves must stay in the ground. This continued investment is irresponsible because it does not accept this truth. And while the council claim that have a fiduciary duty to get the best return for staff on their investment; they are in fact investing in assets that will become more and more worthless. Just this week too there was a report from Exeter University that half the world’s fossil fuel assets could, it estimated, be worthless by 2036. The council has reduced its fossil fuel investments by 30% and aims to reduce them by 50% over 6 years. But where is the urgency? Why six years. The actions or lack of actions over next five to ten years will, many think, determine our future.  As the student strikers used to chant. “Where’s the urgency there’s a climate emergency”. The simple question is; if Waltham Forest, Islington, Lambeth and Southwark can make a commitment to fully divest, why can’t Hackney?

Last year was the hottest on record with thousands of extreme weather events’ only tied with 2016 and 2019 because of the cooling effect of el Niño.  This summer was even hotter and heat of this intensity, once only a likelihood every ten thousand years is now likely every three or less years! Does that make divestment seem urgent? Continuing these investments will enable the fossil fuel giants to continue exploiting these reserves. The Council declared a Climate emergency in 2019 and to show it is serious it is embarking on a Green Recovery Programme.  To show it is serious it is also going to draw up Carbon Action Plans.  We say to show it is serious it must first commit to divest fully from fossil fuels without delay.