It's all in the name: with no hint of shame oil and gas executives from across the world met for 2016 Oil & Money conference.

Protesters and representatives from communities affected by the fossil fuel industry disrupted the opening of the conference by staging 'a climate crime scene.' 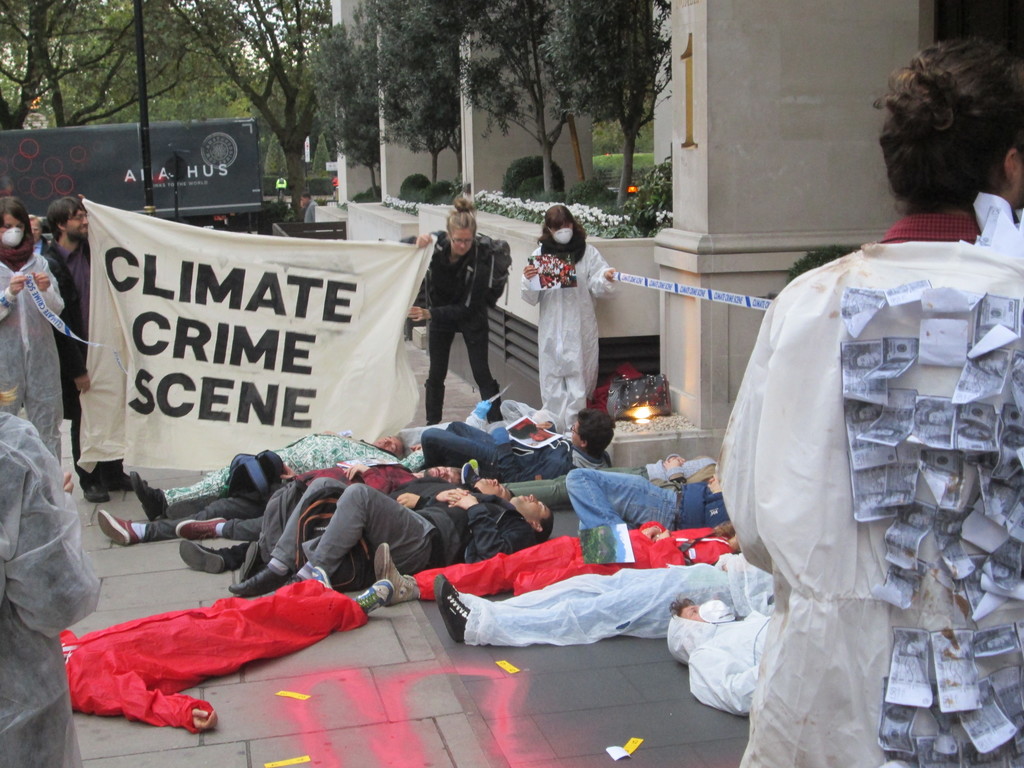 The companies attending were discussing how best to bolster profits. Those attending include Exxon, BP, Shell, Rosneft and other companies implicated in massive environmental destruction, human rights abuses and corruption. Highlights will include speeches made by the CEO's of Exxon and BP, and an award to Total for "new energy" (extreme energy extraction methods such as fracking and underground coal gasification).

Activists spoke out about some specific crimes: the state repression of Sahrawi people in Algeria opposing the contamination of their water resources from fracking, (https://www.ft.com/content/db622d4c-c0f6-11e4-88ca-00144feab7de) as well as the alleged use of paramilitary deaths squads in Colombia and the removal of trade unionists standing up to BP (https://www.theguardian.com/world/2015/oct/24/colombia-oilo-wars--k..., and the disastrous record of oil spillages and graft at Russia's Rosneft. And all against the backdrop of rising global temperatures.

This was a promising demonstration and it's clear we there is now a great opportunity to widen the opposition. While Theresa May is dishing out fracking licences support for fracking is at an all time low. https://www.theguardian.com/environment/2016/apr/28/uk-support-for-...

The action was accompanied by an open letter published today from over 60 authors, performers and activists from leading organisations:

"Executives from BP, Shell, Exxon and other major oil and gas companies from across the world meet in London this week for the ‘Oil and Money’ conference. The theme of this year’s meeting: 'Boom, Bust and Beyond: Strategies for Survival’. The fossil fuel industry routinely disrupts and destroys lives and livelihoods, fuels violence and conflict, and intensifies deadly climate change. ‘Oil and Money 2016’ is not a conference, it’s a crime scene, and we the undersigned call for its immediate closure. It is time the voices of those affected by the industry were heard loud and clear, and real action was taken to secure their survival."

This annual event is a kick in the teeth for the communities of the global South that are being driven off their land and forced to endure the destruction of their environment and exhaustion of their natural resources on which they depend.

While the UK declares itself a ‘climate leader’, it is the country with the greatest historical responsibility for climate change. It’s a scandal that London should play host to morally bankrupt companies, whose fortunes rest on a colonial style carve-up of the planet, at the expense of people's human rights.

As industry delegates discuss the challenges of the “oil price downturn” and their “strategies for survival,” it is patently obvious that the survival of these companies is predicated on the devastation of the environment and with it the destruction of communities in the global South. The UK must stop rolling out the red carpet for the oil and gas industry to white-wash its crimes." This is no conference it is a crime scene.