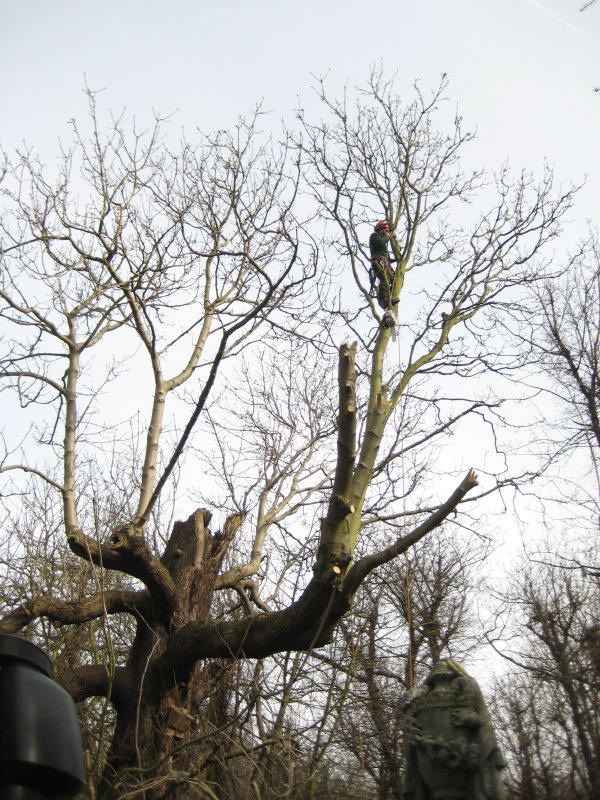 Abney Park Cemetery was a visionary, Victorian masterpiece. In 1840 a new non-denominational garden cemetery was created in Stoke Newington. It also been planted as a world class arboretum with 2,500 species of trees and shrubs from Hackney's Loddiges nursery. A few of these old trees survive together with later plantings and an amazing secondary woodland made up of native and exotic progeny. Designated a local nature reserve and site of metropolitan importance Abney is now a woodland wildlife haven close to the centre of London.

By 2008 it was realised that some of the old trees were at risk and others were dying. Old hawthorns were being shaded out by vigorous young ash whilst 100 year old poplar pollards were subject to windthrow and crown failure. I teamed up with Hackney's tree officer, Ian Graham, to try and save them and the Abney Veteran Tree Project was born. The idea was to manage the declining old trees as veterans. At the same time it was hoped to learn more about the wildlife these trees support and demonstrate ageing Victorian amenity trees have considerable enduring value as habitat.

Veteran trees are often thought of as ancient oaks or beech pollards but a veteran need not be very old. Whilst very old oaks do provide unique specialist habitat for rare invertebrates many insects and fungi can exist on younger trees. The key is deadwood, damage and decay. As Victorian amenity trees age across the country it is vital land owners, especially in cities, grasp the significance of this process. Rather than fell and replant wholesale it is important to value the biodiversity potential of these ageing trees. For example, horse chestnuts are struggling with bleeding canker and leaf miner moths but the Abney project demonstrates chestnuts retrench well into manageable veterans with excellent wildlife habitat. At Abney black poplar pollards support many rare fungi including Silky Rosegill (Volvarialla bombycina), Orange Shield Cap (Pluteus aurantiorugosus) and Mealy Oyster (Ossicaulis lignatilis). The brown rot caused by the bracket fungi Rigidoporus ulmaruis creates ideal habitat for weevils, tree ants, millipedes and other invertebrates. Surveys inside the hollow trees also revealed an under recorded ink cap Coprinopsis spelaiophila which may play a much greater role in ripewood decay than currently recognised.

Thanks to a small grant from the London Tree & Woodland Grant Scheme 170 old trees were surveyed for veteran characteristics. Over 60 were found and 30 of these were prioritised in the project. Work was done by the Hackney Parks Tree Unit to repollard old black poplars and halo prune around old thorns. Chestnuts, ash, a hornbeam and a bean tree also benefited from intervention. Since Abney is a secluded woodland rather than a busy amenity park decisions were made to retain some trees that in more public settings may have to have been felled for health and safety. A detailed Veteran Tree Management Plan has been written together with a draft Woodland Management Plan for the site.

Small signs were created for many of the veterans to explain the works and the trees' value. The signs have been extremely popular and offer a crucial access point for people unfamiliar with trees and wildlife to understand and appreciate complexities of veteran ecology. A leaflet with a map of the trees has also been printed so that people can now guide themselves on an Abney veteran tree walk. Other engagement exercises included guided walks and woodland management workshops.

A Model for Other Sites?

The success of the project can be measured in numerous ways: trees surviving longer than they would have without intervention; wildlife discoveries and recording; greatly enhanced public awareness and participation; many health and safety tree issues resolved. The value for money and achievements of this low budget, locally led scheme contrast with the appalling tree damage and public relations mistakes of the huge capital lottery spend projects in neighbouring parks. The Abney Veteran Tree Project could be copied and adapted for many urban parks with ageing trees. Whether it will or not will depend upon the vision of land owners, availability of expert advice and modest funding.