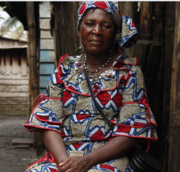 A session exploring documentary filmmaking as a feminist practice to interrogate and reflect upon notions of cultural identity and women’s role –especially in the domestic sphere– in preserving and passing on African heritage and tradition.

THE TWO FACES OF A BAMILEKÉ WOMAN
Rosine Mbakam, Cameroon, 2018
This documentary follows filmmaker Rosine Mbakam, as she goes back home to Cameroon to reunite with her mother, after living in Belgium for some time. They reflect on their relationship and her past, remembering darker times in Cameroon’s history. In this exploration of hidden feelings, stories emerge, bringing life to voices kept in silence and illuminating the faces of the women who built her community and who have helped shape the woman that she has become.

RSVP for Keepers of Culture to add comments!